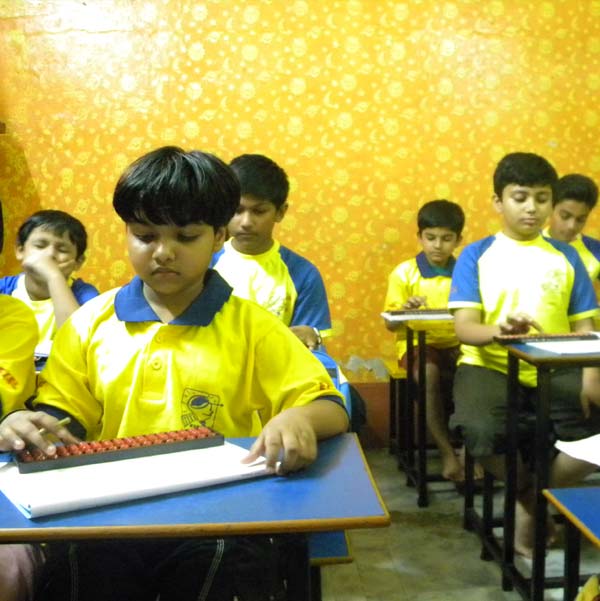 Also called the counting frame, Abacus is a global technique used in preschools and elementary schools to teach math. Abacus techniques are one of the fastest ways of doing calculations especially when it comes to large numbers. The main objective of Abacus learning is to train the mind during the brain's formative stages.

The abacus is the most ancient calculating device known. It has endured over time and is still in use in some countries. An abacus consists of a wooden frame, rods, and beads. Each rod represents a different place value—ones, tens, hundreds, thousands, and so on. Each bead represents a number, usually 1 or 5, and can be moved along the rods. Addition and subtraction can easily be performed by moving beads along the wires of the abacus.

The word abacus is Latin. It is taken from the Greek word abax, which means "flat surface." The predecessors to the abacus—counting boards— were just that: flat surfaces. Often they were simply boards or tables on which pebbles or stones could be moved to show addition or subtraction. The earliest counting tables or boards may simply have been lines drawn in the sand. These evolved into actual tables with grooves in them to move the counters.

There is evidence that people were using abacuses in ancient Rome (753 b.c.e.–476 c.e.). A few hand abacuses from this time have been found. They are very small, fitting in the palm of your hand. They have slots with beads in them that can be moved back and forth in the slots similar to counters on a counting board. Since such a small number of these have been found, they probably were not widely used. However, they resemble the Chinese and Japanese abacuses, suggesting that the use of the abacus spread from Greece and Rome to China, and then to Japan and Russia.

We are here to provide our students with unparalleled opportunities to learn and grow in their respective fields through traditional and educational culture. Superior instruction with superior outcome is one of our objectives. We believe in combining excellence with innovation in all our offered programs, Exel Abacus being one.

To be the leading and trustworthy service providers in the education field by delivering quality services to students from all strata of the society.
To be known for its efficiency by managing innovative product flow along with excellence.