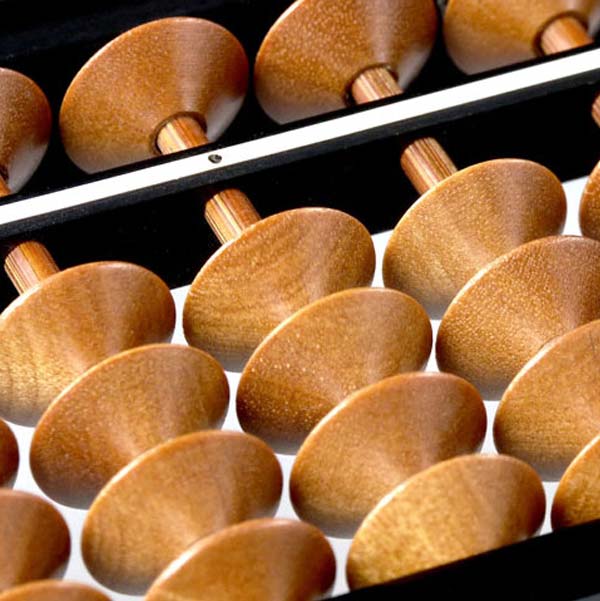 The Japanese abacus is called the soroban. Although not used widely until the seventeenth century, the soroban is still used today. Japanese students first learn the abacus in their teens, and sometimes attend special abacus schools. Contests have even taken place between users of the soroban and the modern calculator. Most often, the soroban wins. A skilled person is usually able to calculate faster with a soroban than someone with a calculator.

The soroban differs only slightly from the Chinese abacus. Instead of two rows of beads in the upper deck, there is only one row. In the lower deck, instead of five rows of beads, there are only four. The beads equal the same amount as in the Chinese abacus, but with one less bead, there is no carrying of numbers. For example, on the suanpan, the number 10 can be shown by moving the two beads in the upper deck of the ones column or only one bead in the upper deck of the tens column. On the soroban, 10 can only be shown in the tens column. The beads in the ones column only add up to 9 (one bead worth 5 and four beads each worth 1).

How's this for a morning teaser: What is 4,112 x 659 ? Or this: what day of the week will it be when you turn 60? Doing the math on your smart-phone calculator or looking up the calendars?

If we tell you that an eight-year-old will figure this out in less than six seconds in his mind, you will think we are kidding, won't you? But with training in the best of global mental math techniques now available in many cities, it's possible for your child — to do this, and more, before you can . No wonder then that many ambitious parents not content with regular school training are enrolling their children for supplementary training in mental math to improve their academic performance and beyond.

We are here to provide our students with unparalleled opportunities to learn and grow in their respective fields through traditional and educational culture. Superior instruction with superior outcome is one of our objectives. We believe in combining excellence with innovation in all our offered programs, Exel Abacus being one.

To be the leading and trustworthy service providers in the education field by delivering quality services to students from all strata of the society.
To be known for its efficiency by managing innovative product flow along with excellence.